Scenario is the main entity of the "Automation" module. A scenario includes: Local structure with its own set of properties, for assigning the Pin types to custom functions and variables.

A block is a graphical element of the scenario constructor, which may include a function, an event, a variable, various operators and converters. 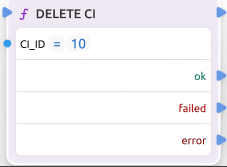 Block parameters - a panel with block settings located on the right side of the constructor, called by clicking on the block.

A block with the OnLogEvent event will be added to the scenario by default when it is created. Adding OnLogEvent blocks from the context menu is blocked.

Pin is a communication node for transferring data or initiating commands between scenario blocks.

Pins are used to determine which inputs and outputs can be connected to each other for data transfer.

The scenario layout is a scheme of interactions of various blocks.

The Object Inspector is the right panel of the constructor used for configuring scenario blocks. Called by double clicking on the block. The Object Manager is the left panel of the constructor used for declaring new objects or for working with previously added ones.

Functions are the main executable blocks of a scenario.

Functions are divided into 2 main classes:

This type of function, in addition to the basic settings, includes the ability to build a structure using the scripting programming language C# scripts.

Comparison operators, math functions, data converters, etc. These functions are supplied by default for all systems, regardless of the composition of the products.

All functions are also divided into 2 categories:

Functions can be Pure and Impure

The user can use variables when building a scenario.

# Rules for naming functions and variables

The name of a function or variable can contain:

The name of a function or variable must start with:

The C# programming language is case sensitive: name and Name are 2 different entities.

The name of a function or variable cannot match keywords (for, if, using).

Each type is color coded for easy identification.

Links can only be established between Pins of the same type.

Automaton Bot is a system user used for "depersonalizing" operations in scenarios of the "Automation" module.